Luckily, there are as many tastes in art as there are individuals. Some people enjoy more abstract ideas and symbols in their art and others like straight forward images with no extra fuss.

The image on the left is titled “I Saw the Figure Five in Gold.” The artist Charles Demuth created this painting between 1924 and 1929 in a style called Cubist Realism. What I like about this piece is the shape of the five and the color. I’ve got to admit that any time I’m painting a fairly large number I think of this work of art so it is, indeed, an influence on my own art.

According to historians Demuth was honoring his friend William Carlos Williams, a poet writing during the same time Demuth was creating art. “I Saw the Figure Five . . .” is an illustration of ideas contained in Williams’ poem “The Great Figure” describing the experience of seeing a red fire engine with the number five painted on it racing through the streets of New York City on the way to a fire. Abstract art is an illustration of ideas more than actually straightforward images of a subject. The five symbolizes the fire engine instead of Demuth having painted an actual red fire engine with a five on the front.

I like numbers in art because a number is a picture symbol. More than a single alphabet letter, a single number actually does stand for a particular idea, the amount of something or the count of something. For instance the letter “h” doesn’t really stand for anything other than the letter itself or the sound of the letter. “H” has to be added to several other letters before a meaning tends to emerge. The symbol “5” on the other hand could be five of something, a number title for something, or number five in an order of things.

In my recent painting shown below titled “Counting on . . .” I used numbers to symbolize thoughts and as a decorative textural layer. People tend to count money, time and possessions. Sometimes counting is done just to pass time in solitude. 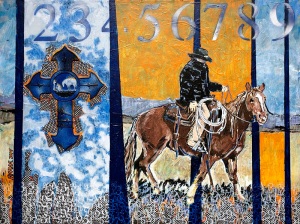 Numbers are used as meaningful symbols and as decoration in this mixed media collage/painting created by Dede Farrar, February 2014.

On the top of the painting the numbers go in sequence. In the bottom of the painting, the numbers are piled on top of each other. Are the piled numbers the result of a jumble of ideas or purely the decorative use of the shapes creating another textural layer? People often ask me, “What are those numbers for?” I don’t want to give them an answer. I would like viewers to assign their own meanings to the numbers. I like to try to insert a few unexpected ideas or images in my art works because I would like to viewers to be able to look and think and continue to come back to whatever piece to look and think and discover more.